Milant Nyundu grew up in a small Mpumalanga town and started working in the sex trade at the age of 17. There were problems at home, she was desperate for freedom and a friend who knew this introduced Milant to sex work.

"I'm gay," she told people and her first client was a young man. Milant tried to go back to school the following year to complete Grade 10 but, she says, "I was not free at school, everyone wanted me to behave like a boy. My mother too, she said I should be playing with other boys." She shrugs, "I'm just like this, I've always played with girl things". She is no stranger to discrimination and verbal abuse. "People still call out 'stabani' (gay) and 'mbishisaga' (hermaphrodite).” So Milant returned to street-based sex work.

Milant is HIV positive, and has been on treatment since the end of 2013. She adheres strictly. She was tested first because a friend knew that she wasn't feeling well and persuaded her to go to the clinic.

"It's fine now, there's treatment. I know that there's no need to be scared."

Milant is open about her status: “This is my life," she says. But she is careful to tell each client. " It wasn't easy for me but I realised that I need to be who I am." There are about 130 sex workers in White River and over half of them are part of the sex worker programme now. They all know their HIV status, and those that need it are on treatment.

Sex worker's relationships with each other can be difficult. There is competition, and often there is jealousy. They aren't always friendly to each other. "But, we need to protect each other", says Milant. Milant is a team leader in White River on the Red Umbrella Sex Work programme, run by NACOSA with 19 implementing partners and funded by the Global Fund. The combination prevention programme focused on health (HIV testing services), risk reduction, human rights and material distribution (condoms, lubrication and leaflets).

The Greater Rape Intervention Project (GRIP) is the implementing partner covering White River. Wandai, programme co-ordinator at GRIP, approached Milant in 2013. He offered Milant the necessary training where she learnt about HIV/AIDS and sexually transmitted infections (STI) awareness, prevention and human rights, as well as how to run workshops, negotiate with clients, other sex workers, police, social services and clinic and hospital staff. After receiving her certificate, Milant began work as a peer educator (called ‘motivators’) in 2014. 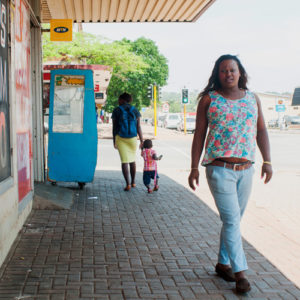 At first, Milant was the only sex worker in White River working with Red Umbrella. Now, many of them are a part of the programme. "I know all of the sex workers in White River". The group grew quickly and Milant was promoted to team leader – she now manages three peer motivators. A risk reduction workshop, called Creative Space, is run each month with different topics like adherence.

On Tuesdays and Thursdays, Milant does outreach, where sex workers are able to tell her about the problems that they face. When she first started working on the programme, Milant knew little about her rights: "I didn't know that I had rights as a human being!" she explains. "We know that in South Africa selling sex is not legal, but we are all human beings".

"I learned so much with the programme. I know my rights and I know about HIV".

Milant hopes that sex work will be legalised in South Africa. "It will decrease the stigma. We could have designated areas. In other countries, it's just a job. Sometimes, the work is enjoyable,” Milant explains. But not always. Many sex workers get abused and have addiction problems. "I'm free now and I'm happy. I'm not always proud, but it's who I am."

Milant lives with her younger brother and sister, who she helps support. "It's not easy work to quit, and it's hard to find other work with my school Grade 9." She remains hopeful though, and has big plans for the future. She's starting part-time computer courses at a college. "I'm getting old," she laughs. "I can't do this work forever".

REACHING OUT TO SEX WORKERS