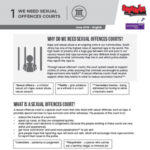 Rape and sexual abuse is an ongoing crisis in our communities. South Africa has one of the highest rates of reported rape in the world. The high levels of poverty and a huge gap between rich and poor in our country means that rape survivors get very different kinds of support, depending on what community they live in and which police station they report the rape to.