Lack of funding is still the most pressing challenge faced by civil society organisations in the NACOSA network, with 75% of network survey respondents citing lack of funding, compared to 63% in the 2017 survey. However, organisations have put in place a number of measures in response to these challenges and are fully committed to the networking spirit of collaboration and sharing.

NACOSA is at heart a network, bringing together civil society organisations working in the HIV, AIDS, TB and related fields. Each year, NACOSA surveys organizations within this network to understand their challenges, needs and capacity gaps. The information is used to improve the network but also to share the issues that civil society is facing with the broader community.

The majority of organisations listed Children & Youth as their primary focus area (32%) with the next highest focus area being Health (15%), followed by People Living with HIV (10%). Other focus areas were more evenly spread, with 43% listing People Living with HIV, 43% Children and Youth, 33% Education and Women & Girls and 27% Tuberculosis. Primary focus areas specified under ‘Other’ included: Substance abuse, Vulnerable groups including people with disability, Older people, Inmates, Community home based care, Psychosocial services, Environment and Sexual and reproductive health rights.

Funding and resource issues are by far the biggest challenge facing organisations in the broader NACOSA network. This has increased from last year with 75% of respondents citing Lack of funding, compared to 63% in 2017. The next most significant challenge was Limited access to information (29%), followed by Lack of programmatic or technical skills (29%). Poor relationships with local government or public services were also a challenge (24%), as was Unreliable or inconsistent funding (20%) and Staffing and human resource shortages (22%). Other challenges described included ‘slow filling of vacancies’ and ‘Transport’. 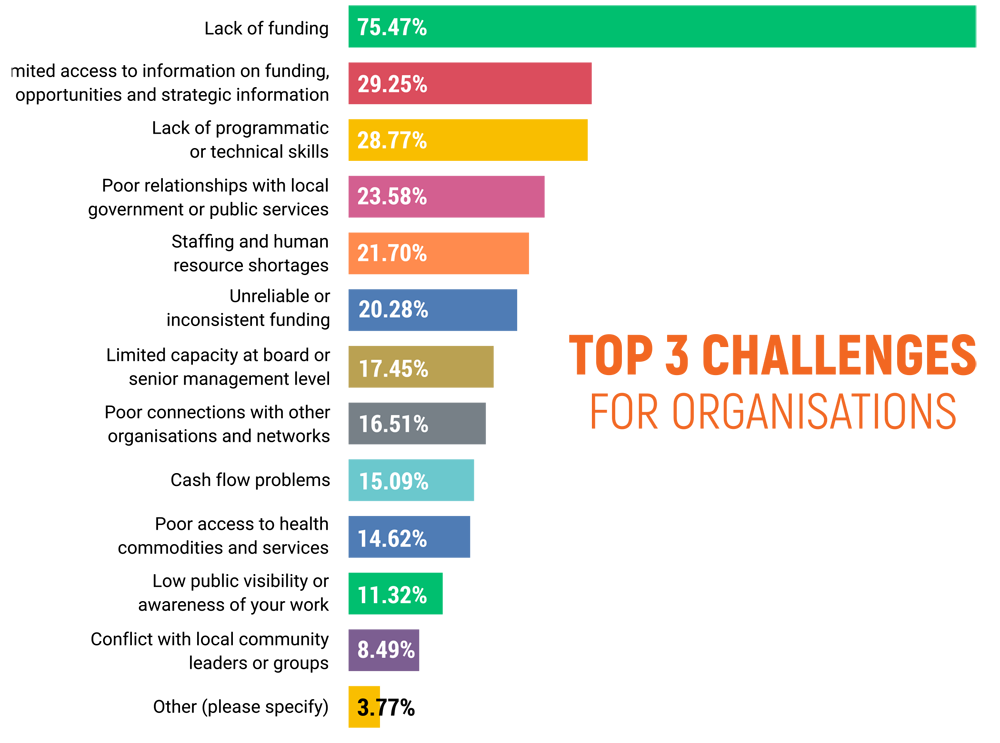 In response to these challenges, 72% had policies and standard operating procedures in place, 60% had developed strategic partnerships with other organisations, government or companies and 56% said they had a monitoring and evaluation framework. Only 26% reported having reserve funds to cover at least six months’ operations.

CONTRIBUTING TO NATIONAL AND GLOBAL GOALS

In terms of the goals of the National Strategic Plan on HIV, TB and STIs 2017-2022, most organisations said they contributed to Goal 1: Accelerating prevention to reduce new infections (71%), Goal 2: Providing treatment, care and adherence support (55%) and Goal 3: Reaching all key and vulnerable populations (44%). Only 9% said they were not familiar with the goals of the NSP.

Respondents provided a range of constructive suggestions on how NACOSA could improve the network. The most cited suggestion was more communication with the larger network and other common suggestions were better notice of events and more opportunities for training and funding. Many respondents said the network was currently meeting their needs:

“I don’t think there’s anything that Nacosa need to improve as they are communicating well with community stakeholders as a result we are receiving your newsletter almost every month and because of that we have managed to see the call for proposals which we have a big hope that our organisation will get assistance as we have applied.”

Encouragingly, many organisations expressed a clear commitment to the spirit of networking:

“By working closer with each other in a collaborative way. Speaking with one voice, ongoing feedback and consultation is the order of the day.”

Not a member? Join our linking and learning network of over 1,500 southern African organisations. It is free and easy to join online