On 1 June 2016, the National Department of Health announced the sites for the initial roll-out of PrEP and test and treat for sex workers. Four of NACOSA’s Red Umbrella sub-recipient organisations’ sites will be part of this exciting and ground-breaking development in the HIV/AIDS response. Nyaradzo Mutanha, Sex Workers Project Manager at the Esselen Street Clinic reported on their launch event…

Sex workers are at high risk of acquiring and transmitting HIV and STIs due to the high number of sexual partners). HIV prevalence amongst this population is very high, with recent study showing an alarming 72% in Johanesburg and surprisingly low uptake of ART at 26 % in Johanesburg (UCSF, Anova Health Institute & WRHI SAHMS Report 2015). On the 11th of March 2016, the Deputy President Cyril Ramaphosa launched the National Sex Worker Plan, which included a combination HIV prevention approach with PrEP, Test and Treat and Peer Education as core components.

The National Department of Health worked closely with partners to ensure that sites were ready for roll out by 1 June 2016. Ten sites will be rolling out PrEP, of which three of these are Wits RHI sites namely Esselen Street sex worker clinic, Sediba Hope Clinic Pretoria and Ekurhuleni mobile clinic. Clinic staff have been trained in all sites on rolling out PrEP and Test & Treat (T&T) and refresher courses and ongoing support have been arranged. Additionally, staff members have attended training to enable them to work with this vulnerable group.

The 1st of June 2016 saw a turnaround in the provision of health services amongst sex workers. 106 sex workers attended the launch. Nonhlanhla Ngcamphalala, our Primary Health Care (PHC) nurse, facilitated the two and half hour session that focused on PrEP and T&T but at the same time allowing questions and answers. It was really a participatory process.

Discussions that came up from the sessions were varied, with some sex workers saying that PrEP was a bit too late for them as they are already infected, while some said that they wanted their main partners to join PrEP and T&T. 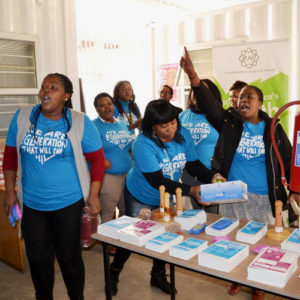 All participants thanked the Government for bringing such an intervention and said it will change their lives. What also came out as a major concern was the issue of side effects and the nurse emphasized that side effects vary from one person to the next and will be effectively managed at the clinic. A Peer Educator who is already on PrEP, who is a PrEP ambassador, gave a testimony of her experience on PrEP and how it has changed her life completely.

Sex workers were also informed that PrEP and Test & Treat support groups will be formed for ongoing support. Sex workers attending the launch indicated that they will be coming for both PrEP and T&T. The Ekurhuleni site also has a database of sex workers that were tested and referred to local clinics for further management. The team will be doing follow ups to see if the sex workers were linked to care and for those that were not will be initiated on ART.  Additionally, the team will follow up on sex workers that have tested negative to HIV and screen them for eligibility before putting them on PrEP. Our Risk Reduction workshops will focus on PrEP and T&T for the next two quarters to ensure that the topic is adequately covered among sex workers.

We believe we are the generation that will end HIV.