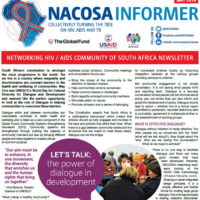 Let’s talk: South Africa’s constitution is amongst the most progressive in the world. Yet we live in a country where inequality and discrimination are constant barriers to the health and wellbeing of communities. May 21st was UNESCO’s World Day for Cultural Diversity for Dialogue and Development and seemed like the perfect opportunity to look at the role of dialogue in helping communities to overcome these barriers. (6MB pdf)