Qumbu is a small, rural town in the Eastern Cape, near Mthatha. Poverty and unemployment rates are high and HIV and AIDS affects many in the community. Dr Makaziwe Mgobozi, or 'Doc', as she is known, is a busy woman, whose white coat is seen busily flashing around the community clinic that she runs. What began as a small practice has become a shining example of a certified non-medical site for HIV testing services (HTS), reflecting the meaning of its name, Siyakhanyisa – we are shining.

In Qumbu, the path to HIV and AIDS awareness has not been easy but today, this community sets an example. Siyakhanyisa came about because Doc saw the need for awareness campaigns in the area. There was so little knowledge about HIV and AIDS and there was a huge stigma attached to a positive test result. “It wasn't easy to disclose because even if you're in a safe place, there was discrimination. Even in church, people would move away," says Doc.

In December 1990, she opened a private practice, one of just two practicing doctors in Qumbu. "HIV wasn't a problem in South Africa then." But in 1991, the results started coming in positive. "I was surprised. What was happening?"

"We still knew it as a disease that was American." Suddenly, there were over 150 positive tests and people were scared. "People were told to come to me but they didn't," remembers Doc. Families didn't want to disclose HIV-related deaths. People in the community were guessing and rumours started. Doc realised that she needed to do something. She ran her first awareness campaign in 1999, with the help of a nursing sister. They talked to people about signs and symptoms of HIV and how to prevent the spread of the disease. 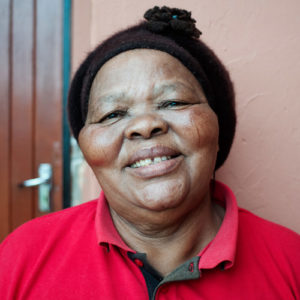 Slowly, people started coming in to get tested and Doc began running support groups, where people could who were living with HIV could talk and support each other. When antiretroviral treatment began, there were success stories. Positive women gave birth to negative children and previously bedridden patients were living healthy, happy lives.

"Lies have short legs," Doc laughs. The clinic began receiving support from the Department of Health, the Department of Correctional Services and local businesses. The funding helped Doc start 13 support groups in the area, which are now accessed by people from 23 surrounding villages. More and more people came to get tested and joined support groups.

Gretta Mthi has been working with Doc at the clinic since 1999. She was a mentor at one of the very first support groups, and her beautiful contralto voice sings out clearly in support groups. In the early 90s, she explains, "people were hopeless, basically bedridden. Those same people are working here now". She smiles, nodding toward other staff members. She has seen the change happen, and realises that "now, people are more open. The dynamics have changed. I'm proud of too much!" Gretta hopes that the in the future, people will receive the right education about HIV/AIDS. "They will know to use condoms and to get tested. Infections rates will be much lower". 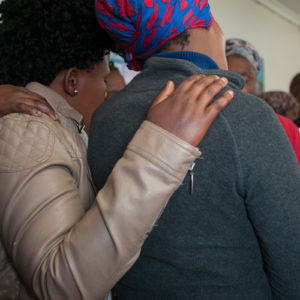 People help each other to stay healthy in the support groups

Zimbini Gesi is the co-ordinator at the clinic. She found out that she was HIV positive about ten years ago, and came to Siyakhanyisa for support groups. Once she understood her status, her views changed. "Now it was my responsibility," she says. "I saw that there was no reason to be suffering alone." Zimbini completed extensive training, through correspondence and workshops, and became a member of the Siyakhanyisa team, appointed co-ordinator of the facility and has been a committed and loyal member of the team since. "I love Siyakhanyisa," she smiles, "it changed my life. If I didn't come, I don't know what would have happened.”

Mzolisi and Vuyelwa are both HIV positive clients who attend regular support groups at Siyakhanyisa. Mzolisi lives in a nearby village, and started coming to the support group in 2008. He was already on ART but says: "I have done very well to come here. I learn a lot. I can educate other men like me. Rural people need education. They know nothing about HIV and AIDS." Vuyelwa tested positive in 2014:

"I feel better now. The support group takes the stress away. I'm happy. Life is easier. If you teach people, then they will go away with knowledge and it will help them."

Doc has immense pride in her community and the fact that the numbers of new infections are falling. Doc values the capacity building support her organisation has received and how it has helped them to become more sustainable: "I want this organisation to continue even without me." There are so many rewards, she explains. It's not just saving lives, it's seeing patients get better and get happier. She gestures around her. "To see people like Zimbini, (she is in the corner, typing out proposals on the clinic's computer) like Thenji.”

"To see people coming in to test, to see organisations like NACOSA supporting us. There's reward everywhere".

What drives Doc to persevere in her work, despite the difficult times? "It's the oath. The patient always comes first."

NACOSA provided community organisations with the training, mentoring, technical assistance, evidence-based models of good practice and networking opportunities so that they can help patients in the community access comprehensive medical care, adhere to treatment and improve their self-management skills.