Semakaleng 'Sma' Motapho has been the project coordinator in the higher education MSM/LGBTI programme at the University of Venda (UniVen) since April 2015. UniVen is in Thohoyandou, Limpopo, in the centre of the Vhembe district. The area is known for its conservativism and being from the LGBTI community - and openly so - can be extremely challenging in this context. But Sma embraced his position at the university and made the programme his own.

Sma is from Bela Bela (about 350km away) and is openly gay, and cross-dresses, but he doesn't identify as a woman. "I'm just more comfortable in [traditionally] 'female' clothes", he explains. "I'm just Sma". He is currently completing a Master's in Gender Studies, researching identities in the MSM community and is passionate about development. 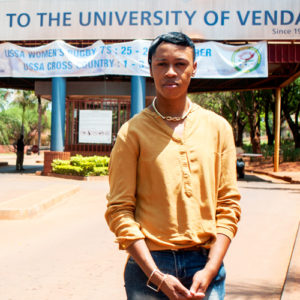 There are hostile attitudes toward the LGBTI community in Venda. Sma explains that homosexuality is regarded as 'matula' (taboo). "It's going against the culture", he says simply. "In the beginning, it was very hard. I experienced a lot of red tape from every direction." But this was also an opportunity to challenge and breakdown institutional barriers and give the human rights issue of LGBTI sexual and gender rights visibility - a face and a voice.

As Sma has grown and developed, so has the programme. "Being openly gay and dressing like me creates an immediate barrier here. People found it problematic to be seen with me." Attendance at the LGBTI support group that Sma runs was slow at first, but now there is more openness and over twenty people attend. Before the programme:

"They didn't have a space on campus to be who they were. It was an area that nobody wanted to entertain. It was a no-go area."

Sma hopes that this programme will ultimately be a permanent one and that it doesn't fade away when he is longer there. "I can see momentum and progress but it needs to continue." Of a student body of 15 000, the fact that only 20 people come to groups is a sign that there is a need for the programme to continue. Since he's begun work at Uni-Ven, Sma has seen changes but there are many more that are needed. His project is about creating a healthy and safe environment for the LGBTI community on campus.

After studying social work, Sma worked with an organisation for refugees, and witnessed many people being persecuted – for their refugee status, and then doubly persecuted for their HIV status. He recognised the discrimination happening on many levels and realised that an LGBTI disclosure further multiplied the discrimination. Sma firmly believes that one of the most important factors in making health services and prevention messages accessible to key population groups like MSM lies in the heteronormative language used by institutions.

"Prevention messages about HIV shouldn't revolve around women and men. The commentary and the narrative is very heteronormative. We have to speak about the crossover."

He refers to University application forms as an example. People still confuse 'sex' and 'gender'. "It creates barriers by putting people into boxes." Sma believes that heterosexual people also need to take responsibility and advocate for LGBTI issues. "We need to teach children about sexuality," he says.

Uni-Ven runs a successful HIV testing programme but one of the difficulties that Sma faces is simply that MSM don't disclose easily. "It's a tricky area," he reflects."There is so much diversity and I believe that it's sometimes the diversity that people are scared of."

"I do what I have to do. Sometimes, I've wanted to leave but my conscience won't let me. I am needed here. I'm saving lives."

The University fully supports Sma's programme and there have been anti-homophobia drives on campus. There is still a long way to go though, and Sma feels the enormity of his task. "Sometimes I think that if I leave here, it will be back to square one". 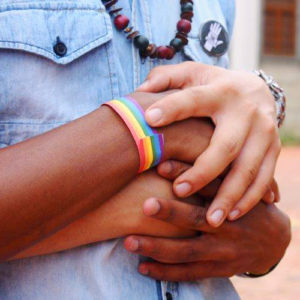 "It’s been a journey for me," says Sma as he tells his story. "I realised that I was different when I was about six years old. My mom didn't want to buy me dresses and my dad didn't want me to put on makeup. But I did. At school I also realised I was different. Boys wouldn't accept me and neither would girls. What did I know about being gay as a child? When I reached puberty, I told myself that I needed to stop. I observed men and I tried to mimic them. I tried to get rid of this hand gesture!" he laughs, nodding towards his effeminately gesturing right hand.

He started smoking, drinking and dating women. "My goal was to impregnate a woman. I wouldn't use condoms." He dated women and repressed his sexuality for over eight years, becoming more and more unhappy. "I was trying to be somebody that I wasn't. But my hand still did this." Sma tried to kill himself in 2005 and again four years later. "Then, I realised that I was missing something. It was me."

He went for counselling and realised that there was nothing wrong with being gay. Coming out was a slow process but his family was understanding.

"We don't have control over things. I can't change! It wasn't a choice. You wouldn't choose discrimination, nobody would."

"This programme has really helped me to understand myself more," says Sma. "My father is just my father. He sees me with lipstick now and tells me that I look beautiful." Sma acknowledges that it's unusual in this community to have such a supportive family. "I've been blessed to have these people."

"You need to be resilient," remarks Sma. "You have to stand your ground. You have to be strong, as emotionally strong as possible, because you see things and understand things that people don't get."

As the first of its kind in South Africa, the Higher Education Institution Men who have Sex with Men (MSM) Programme contributed to the knowledge about student  sexual behaviour in the context of HIV transmission and implemented a programme to reduce risk-taking sexual behaviour, increase access to sexual health and HIV testing and create an enabling environment for MSM and LGBTI students.